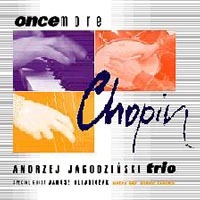 “To adapt the great masters of classical music into jazz is extremely difficult, if one doesn`t want to betray their works. It takes a great pianist and a great musician to succeed in such a task. That is absolutely the case with Andrzej Jagodzinski, who has passed this test beyond any doubt, with all necessary mastery , and made this record one of the most perfect achievements of the genre”.

From CD booklet by Martial Solal

1999 has been declared by UNESCO the Chopin Year. In this way the world is going to celebrate the 150 th anniversary commemorating the death of one of the greatest composers in the history of music. On this occasion we may sample the delights from the music of this great Polish pianist and composer not only through performances at concert halls, which have a long-established tradition, but also we can expect to hear a more modern sensibility from some of today’s performers as the 20 th century draws to a close. In the musical culture of our time there is a tendency for cross borders of styles, seeking various kinds of inspiration, referring to what was done in the past and evaluating and commenting on it in a new way. But these activities are often an eclectic process creating no new values, but seeking just a cheap originality.
Indeed playing Chopin is no joke. Its requirements can be met only by outstanding artists. And yet for all its dangers and difficulties it may produce enchanting music, restful, reflective, a most profound artistic experience. ‘CHOPIN ONCE MORE’ CD Cover
Andrzej Jagodzinski is with no doubt such an inspired artist. With what has been written by Martial Solal, I can only add that Jagodzinski, educated in the tradition of Polish music, succeeded like no one before in joining two great traditions: romantic piano music and jazz, both understood as one expression of an unlimited invention. And in this is to be found his extraordinary talent. Although at first sight they may be distant from one another, when we come to know them better it appears that they have very much in common not only in the musical sense but also in their feeling and spirit.
This session, so unusual in its idea, became also an occasion for quite an event. In one of the pieces, the Etude in G flat major, Op. 25 no. 9, Andrzej Jagodzinski was accompanied by a special guest, one of the major interpreters of Chopin`s music, Janusz Olejniczak. May this meeting, in the shape of an adroit ragtime joke, be regarded as evidence of just how artistically refined the crossing of stylistic barriers can become.
So there you have “Chopin Once More”  that is a tribute to Frédéric Chopin, or a modern look at a historic heritage, a link between the old and the new, or quite simply an invitation into a land of beautiful music and profound feelings.

From CD booklet by Maciej Karłowski

Jazz has naturally adopted, the nineteenth-century tradition of improvizing on known themes. In the case of the Andrzej Jagodzinski Trio so popular and loved by all of us, the Chopin themes found a refined performer endowed with taste and sensibility. I am very pleased that I could take part, if only symbolically, in this project. It was for me a wonderful relaxation and a pleasure, but I should like it to be also an expression of my admiration for the talent and art of Andrzej Jagodzinski. I am glad that Andrzej made “once more” a Chopin record.

From CD booklet by Janusz Olejniczak