The Andrzej Jagodzinski album of jazzed-up Chopin, recorded in December 1993, was an event. It was showered with awards and caused a veritable avalanche of similar, though quite varied projects; I, however, was still waiting for a continuation of that first take, for another Chopin by Jagodzinski.

It has now appeared, although in a form I did not expect. Instead of a new set of Chopin compositions, we receive a repeat of the same program with only two brand new pieces. Although this may seem disappointing at first, that feeling disappears the moment we start listening to this album – this is a completely different Chopin, although in large part the same. Because, if Chopin remains Chopin, jazz does not stand still – if only because of its improvisation character.

All of the jazz-Chopin projects differed in their basic principles and we cannot evaluate them in terms of which was better and which was worse; it happens, however, that of all of the artists, only Andrzej Jagodzinski utilized this music consistently and frequently during tens, if not hundreds of concerts. Always with the same ensemble that is with the trustworthy support of Czeslaw Bartkowski on drums and Adam Cegielski on bass. They became, so to speak, common share-holders in this projects and they were all equally interested in its fate. The memorable original was born in the studio; the album was a premiere performance and a general rehearsal at the same time. Regardless of the noble sense of inspiration which always accompanies the creation of something new, it also was necessary to look in the score and overcome purely technical problems. After all, this was not some garden-variety jazz; in this music many unusual situations had to be tackled if Chopin himself was not to be forfeited.

It was only at the concerts that the time came for further improvements, embellishments, striving for perfect freedom and ease when they had the technical stuff down pat. And this freedom and ease jazzman for purely creative elements, i.e. the quality of interpretation and – most importantly – of improvisation. Not surprisingly, the new recordings are far more expressive, free, fiery and dynamic when they should be – in a word, they have come of age. Clearly, after gaining two years of experience the band feels in its element.

And most of the improvement can be felt in the more developed improvisations. On the first album the program lasted 35 minutes, not counting the final reprise. On the new one, the same program lasts for 54 minutes (without the two new pieces, the Nocturne and the Polonaise-Fantasia). Even though those pieces which demand it are played faster. The Waltz in Des-major lasted almost 58 seconds, now – 55. The Etude in A-minor went from 36 seconds to 31.

Of course, statistics are not of the essence. The really stunning thing is bravura musical effect; and it’s not the cavalry-charge-against-the-tanks kind of bravura. No, it is a deeply conscious utilization of increased capabilities. Of course, I am positive that Andrzej did not count the seconds but made sure the tempo was right. I was the one who counted them – I sometimes have silly ideas like that.

Of course, there are other improvements. The original did not include a solo piano introduction to the Prelude in E-minor, this album does.

You will find other surprises on the album, but the most important thing is the time of two years separating the two projects – two years, during which the whole world changed for the trio. The world they wander through today, welcomed with applause, and, more importantly, receiving applause as they leave, like the stars they are. Not only, as before, supporting any frontman who asked. Even though many did the asking. A sensitive shy youth has transformed into a self-assured, dynamic guy without losing his sensitivity on the way. This, of course, does not refer to Jagodzinski himself, who in fact remains shy, although he has become a little bit less taciturn (but only on the subject of music).

And speaking of the music, let’s ponder this phenomenon. A lot has been written about it already, so perhaps I will not be covering new ground, but it has to be done.

The first thing is that this jazz Chopin was not born out of the blue. Jagodzinski started on it when he was still in high school, persuading his friends that it must work out. He was always a good jazzman, which everyone was aware of, but his penchant for Chopin was part of a more intimate side of his personality. Thanks to this, he managed to achieve a wonderful balance between the language of jazz and the spirit of Chopin. If some guy who has never heard of Chopin listened to these recordings, he would say that this simply damn good jazz, while Chopin specialists must admit that nothing was lost of the noble intention of the original, even if it was extensively modified.

Fortunately, there was plenty of time for all the changes, because the artist did not see them as projects to be completed but quietly and slowly toiled thorough. He not attempt to find one universal key, but looked for the perfect approach to each piece. This could have been a simple rhytming-up, but all the time appropriate little textures were woven in the improvisations, reminding us of what we are dealing with – the Polonaise Cis-minor is a case in point. It could be unchanged form with only a few new things, but with very jazzed-up harmonies, like the Mazurka in F-minor Easy enough to say, but improving Chopin’s harmonies seems a fantastic task.

Andrzej would probably have plodded away at his Chopin work for another dozen years if he was not approached by Polonia Records. The sudden publishing idea was thus wonderfully harmonized with long-planned results of weary (although fascinating) toil in Andrzej’s free time.

And as to the question of whether such “sacrilege” should be attempted at all – I will not add to the heated debate. Musical “environmentalists” don’t have to worry – Chopin is not an endangered species and he will be with us forever. And surely there will remain fond memories of someone who dared love Chopin and remain a true jazzman – and without unnecessary hang-ups, soul-searching and developing a split personality. 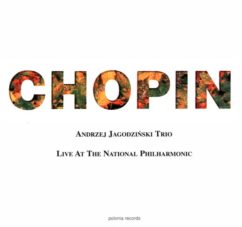 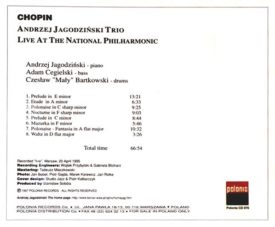 7. Polonaise – Fantasia In A Flat Major